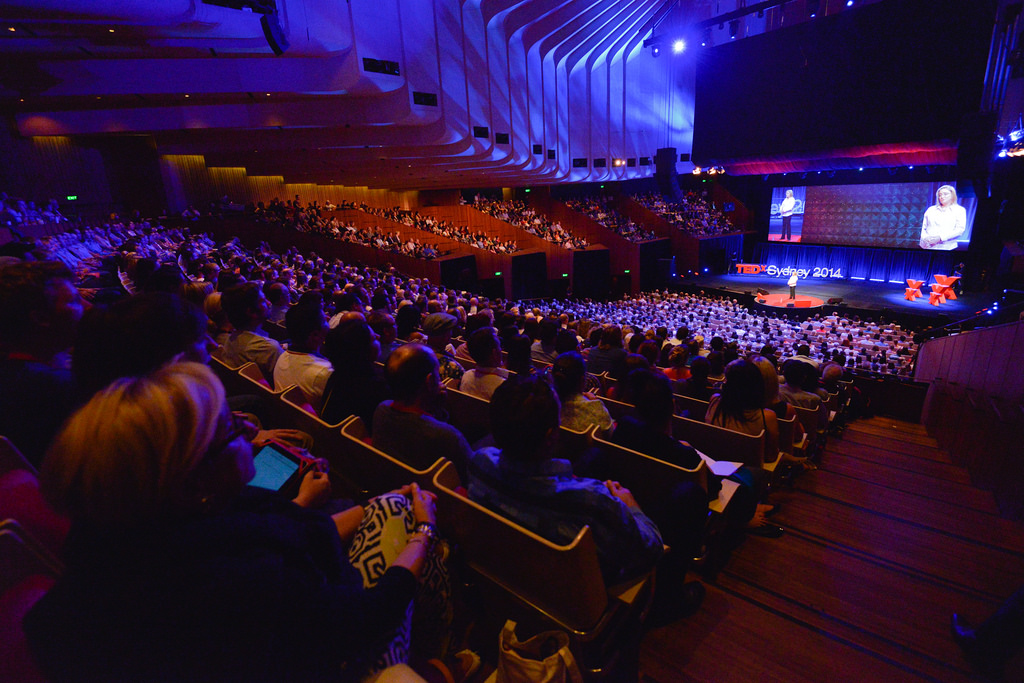 TED is a US based not-for-profit enterprise devoted to the propagation of Ideas Worth Spreading. TED started out in 1984 as a conference bringing together people from three worlds: Technology, Entertainment & Design. Started as a four-day conference in California 28 years ago, TED has grown to support those world-changing ideas with multiple initiatives. The annual TED Conference invites the world’s leading thinkers and doers to speak for 18 minutes. Their talks are then made available, free, at TED.com.

TEDxSydney is an independently organised event licensed from TED by longtime TEDster, Remo Giuffré (REMO General Store) and organised by his General Thinking network of fellow thinkers and other long time collaborators.

TEDxSydney has become the leading platform and pipeline for the propagation of Australian ideas, creativity, innovation and culture to the rest of the world. It is the leading conference of its type in Australia and the largest TEDx event in the world.

TEDxSydney 2014 was held at the iconic Sydney Opera House. Innovative Production Services jumped at the chance to be a partner of such an inspiring and high profile event. Not only was it a day of Ideas Worth Spreading for the 2,500 delegates in the room, it was streamed live to millions of people around the world and each presentation will be available on YouTube with millions more expected views.

This event pushed Innovative to create and execute a show like none we have done before. The main event was in the Concert Hall of the Opera House with The Studio operating simultaneously which took over the live broadcast when the Concert Hall was in a break. There was also a VIP breakfast event in the Marquee, and an after party in the foyers which concluded a massive 12 hour event.

NOW, TIME FOR THE TECH INFO!

In the main room we had a completely redundant backup system of all vision systems to ensure the show would go on uninterrupted under any circumstances. Projectors, laptops, video playback machines, background graphics, cabling systems – all were running as hot back-ups which could be switched in an instant if an equipment failure occurred. With a  live event of this magnitude, it is crucial that there are no interruptions.

The main screen was a 12m x 4m rear projected blended screen using 4 of the new Barco HDX-18k projectors. Dozens of overflow screens were also spread throughout the Opera House showing the live feed of the event from the ABC broadcast truck. 12 lines of cameras were recorded by Innovative, to be edited for broadcasting post event. Our Barco Encore vision system controlled all of the vision mixing and routing of the 14 show computers, Coolux backgrounds and 4K video rolls, 16 camera lines, bleacher screens, foldback monitors, record feeds, stage feeds. You name it, we had it!

Our full time CAD drafter Hayden, measured and drew the entire Opera House Concert Hall in 3D which allowed us to check camera views and sightlines from any seat in the house. (See some of the renders below and how accurate they were against actual photos that we took at the event). In addition to the tech plans done for our equipment, Innovative also provided plans for Box office seating, The Studio, Northern Foyer, Southern Foyer, and Opera Point Marquee.

All of the content on the screen was created in double full HD resolution which made for amazing looking video rolls. The ‘Tasty Video Bits’ were played back from Coolux Pandora’s Box and controlled by Grand MA2. This allowed the hi-res videos, bumpers, title slides, and on-screen graphics to be created in 4K wide resolution.

You can watch the live recording of all of the presentations here: http://tedxsydney.com/LIVE or check out the edited individual presentations on YouTube here: https://www.youtube.com/user/TEDxSydney